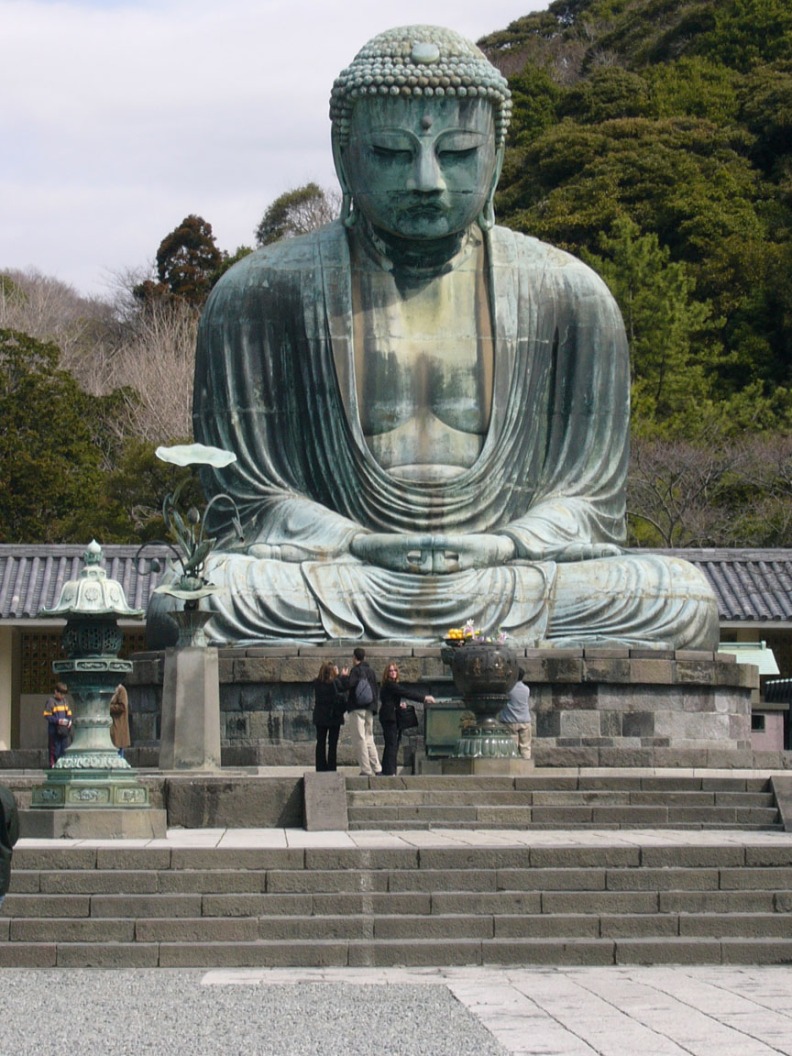 Let’s get out of Tokyo for a day, and see some of the most entertaining shrines and temples in Japan.

First, let’s go to the Zeni-Arai Benten Shrine and double our money. It’s known as the “Money-Washing Shrine” because any money you wash in the shrine’s spring is said to double within the year.

Look at the baskets in front of the little altars scattered around the shrine – they’re for the hardboiled eggs worshippers bring to the goddess Benten, who sometimes manifests as a snake. Eggs are one of her favorite foods.

Let’s go to the far side of the grotto to the cave with the money-washing stream running through it.

A short walk from the money-washing shrine is Sasuke Inari Jinja, the best fox shrine in all Japan.

When you’re ready to leave the mossy twilight zone of the fox shrine, let’s head over to the Giant Buddha.

After snapping all our pix at the Giant Buddha, let’s go see the Giant Kannon at Hasedera. This is the biggest gold-covered wooden Kannon statue in Japan, and it’s at a temple that has a gorgeous hydrangea garden (they bloom in June). On the path, we’ll pass hundreds of little Jizo statues.

Back near Kamakura Station, the big main street through town leads to the Tsurugaoka Hachimangu Shrine. Built for the shōgun in the days when Kamakura was the capital, it’s an elaborate red and gold-style shrine with famous lotus ponds that bloom in July.

Not far from the Tsurugaoka Hachiman Shrine is an unusual shrine called Kamakura-gu, or (as I like to call it) the Dish-breaking Shrine.

If you fancy a super nice stroll through a bamboo forest, let’s get ourselves over to the Hokoku-ji Bamboo Temple. The grounds are huge, and the walking paths are really nice.

Now let’s get back on the train and get off at Kita-Kamakura Station, so we can catch come noodles for lunch. On the way is a temple I really enjoy, the Tokei-ji Divorce Temple. In 1251 it became a sanctuary for women fleeing from their husbands – if a woman lived with the nuns inside the walls of the temple for three years, she was considered legally divorced.

Are you hungry yet? Okay, let’s eat some noodles! From May to October, we can catch our own as they float down the middle of the table.

While you’re in Japan, read a novel set in Tokyo!

“A genuinely gripping crime thriller which wrong-foots and perplexes the reader throughout, drawing us in emotionally . . . Highly recommended.”